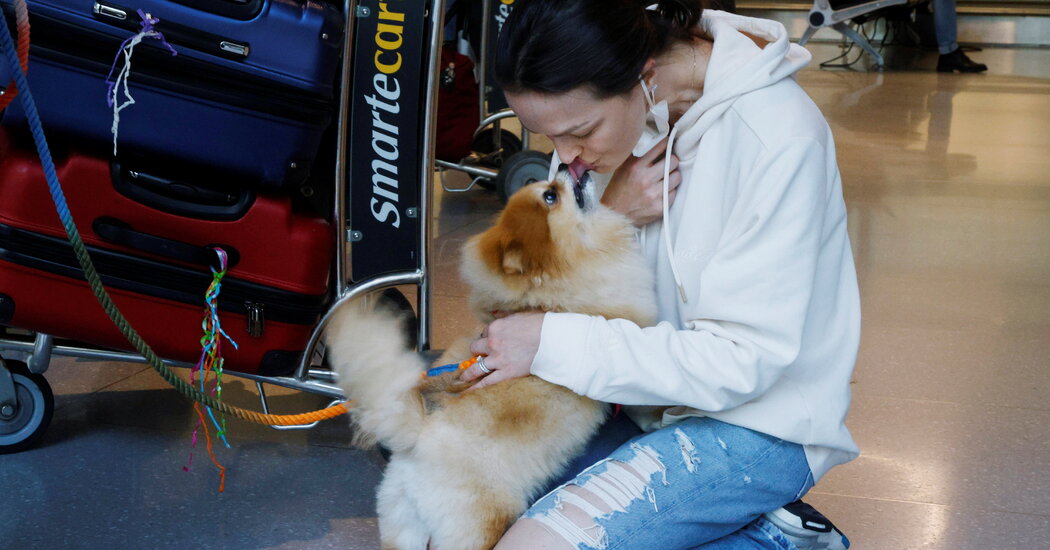 The United States government has eased up on a rule that had banned the importation of dogs from 113 countries because of concerns over fraudulent rabies vaccination certificates. The change comes less than six weeks after the ruling, which pet owners had complained was overly restrictive, went into full effect.

As of Oct. 14, the Centers for Disease Control and Prevention had blocked the import of dogs, both foreign and those re-entering the country after traveling abroad, from 113 countries where the risk of rabies transmission for dogs was considered high. The ban was spurred, said the federal agency, by an increase in falsified health documents from international pet importers over the past 18 months.

Now, travelers flying with dogs who received their inoculations from a U.S.-licensed veterinarian may return to the U.S. from the previously banned countries, providing the animal is healthy, microchipped and at least six months old, and its owner can provide a valid U.S.-issued rabies vaccination certificate.

The decision was announced over the weekend on the C.D.C.’s website. The agency did not respond to questions about what had spurred the change.

In 2020 alone, as pet adoptions surged across the United States, the C.D.C. said it intervened in more than 450 cases where dogs were being imported with false or incomplete rabies vaccination certificates. In June 2021, one rabid dog was imported from Azerbaijan, prompting a public health response involving agencies in nine states. For the C.D.C., that one incident was enough.

The dog’s importation “highlights the timeliness of C.D.C.’s temporary suspension and the risk associated with rescue dogs imported from countries at high-risk for dog rabies,” said Emily Pieracci, a veterinary medical officer with the C.D.C., in an email. “Dog rabies has been eliminated from the United States since 2007 and dog importations from countries at high risk for rabies represents a significant public health risk.”

Dog owners heading out of the country with their animals should make sure their paperwork is up to date, and check their arrival and departure cities: The C.D.C. will not accept expired rabies vaccination certificates, and effective Dec. 1, all dogs that have transited through a country deemed high-risk for rabies by the C.D.C. must re-enter the United States at one of 18 approved ports of entry, including Chicago O’Hare, John F. Kennedy International and San Francisco International Airports. The C.D.C. had also initially planned to reduce those 18 approved ports to only three in early 2022, but has now rolled back those plans.

The C.D.C.’s change of policy does not offer relief to people, including aid workers and U.S. service members, who want to bring dogs to the United States for the first time. Many of them are struggling to reunite with animals they adopted during tours of duty abroad, and they have complained that the rule was too restrictive. Animals adopted abroad, without U.S. vaccination papers, are still unable to enter the U.S. without special permission.

Related Topics:
Up Next 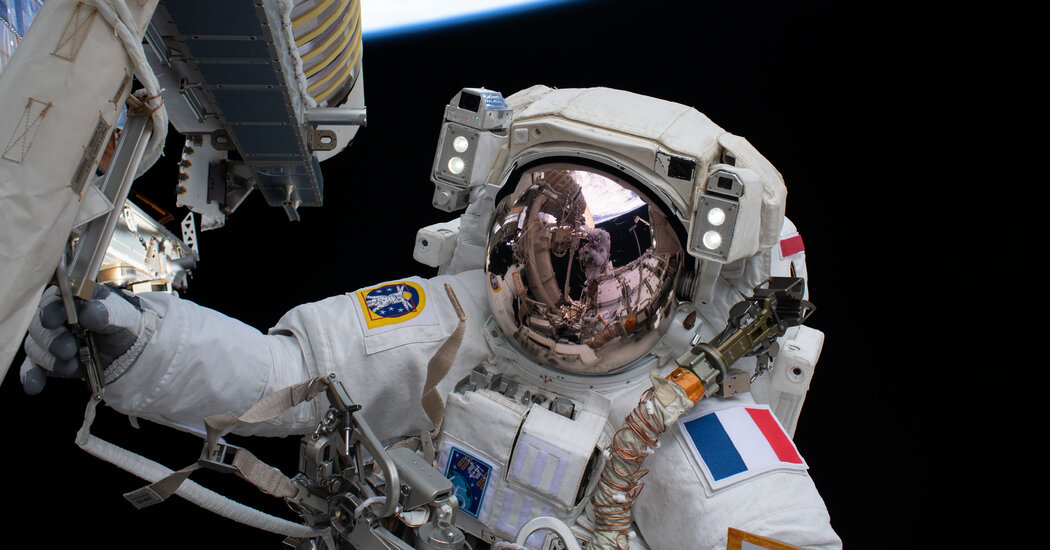 NASA officials called off a Tuesday spacewalk late Monday night for two of the agency’s astronauts after receiving alerts that nearby space debris could endanger the crew. It was the latest abrupt change to the International Space Station’s operations since Russia blew up one of its old satellites in space earlier this month.

“Due to the lack of opportunity to properly assess the risk it could pose to the astronauts, teams have decided to delay the spacewalk planned for Tuesday, Nov. 30 until more information is available,” NASA said in a statement it posted on Twitter early Tuesday morning.

Tom Marshburn and Kayla Barron, two U.S. astronauts who arrived at the orbital outpost earlier this month, were scheduled to don their spacesuits and scale the laboratory’s exterior at 7:10 a.m. Eastern time on Tuesday. Their mission of about six hours was to replace a broken communications antenna.

The agency did not specify where the debris came from, and a NASA spokeswoman did not answer requests for comment. Officials said the spacewalk was rescheduled to Thursday.

Mark Vande Hei, a NASA astronaut on the space station, checked in with mission control in Houston after waking up to an email that showed the spacewalk had been canceled.

“Sorry for the news,” a NASA official in Houston replied to Mr. Vande Hei over the ground-to-space channel. “We’re probably almost as disappointed as the crew members today, but I know it’s a little bit harder for you guys waking up to this news.”

“It’s just real life, this is how things work out sometimes, and I’m really glad people are looking out for our safety,” Mr. Vande Hei said.

Earlier this month, Russia struck a defunct Soviet-era satellite with an antisatellite missile, spawning thousands of untraceable smithereens that could remain in orbit for decades. The widening field of hazardous space debris created new threats to the space station and could jeopardize other satellites in orbit, according to the U.S. Space Command.

The initial debris cloud from the Russian satellite strike came dangerously close to the space station, which housed a crew of seven astronauts, including two from Russia. A NASA mission control official in Houston abruptly awoke the agency’s astronauts soon after the strike, urging them to take shelter in their spacecraft in case they needed to return to Earth. The crew kept certain hatches on the station closed for days following the incident and opened them when the immediate danger had abated.

“There are about 1,700 new objects, larger objects that are being tracked,” Dana Weigel, NASA’s deputy manager of the space station, said on Monday during a news conference that previewed the scheduled spacewalk. “It will take a few months to get all of those cataloged and into our normal debris tracking process, where we can then assess miss distances and how close these items get to the I.S.S.”

Ms. Weigel said that the Russian weapon test doubled the size of the background debris environment for the space station. She said that the new field of wreckage raised the risk to spacewalking astronauts by about 7 percent. But she said that “falls within the family” of similar risk calculations for past spacewalks.

The Russian missile test, which lifted off from the Plesetsk launch site, roughly 650 miles north of Moscow, angered U.S. officials and drew condemnation from other countries, including Australia, Canada and Britain.

Bill Nelson, NASA’s administrator, said shortly after the test that it was “pitiful that the Russians would do this.”

The spacewalk delay came a day before the White House will convene the first meeting of the National Space Council during the Biden administration. In a letter sent to the council on Monday, lawmakers on the Senate Commerce Committee urged Vice President Kamala Harris, the council’s chairwoman, to act on the Russian antisatellite test and “work to develop international dialogue on norms of responsible behavior in space.”

There have been a dozen spacewalks this year, many of which added new components and solar panels to the space station’s exterior. NASA intends to keep the 21-year-old orbital laboratory running until 2030, pending congressional approval. But the station has already shown signs of its age, like cracks and air leaks that were discovered on a key module in 2019. 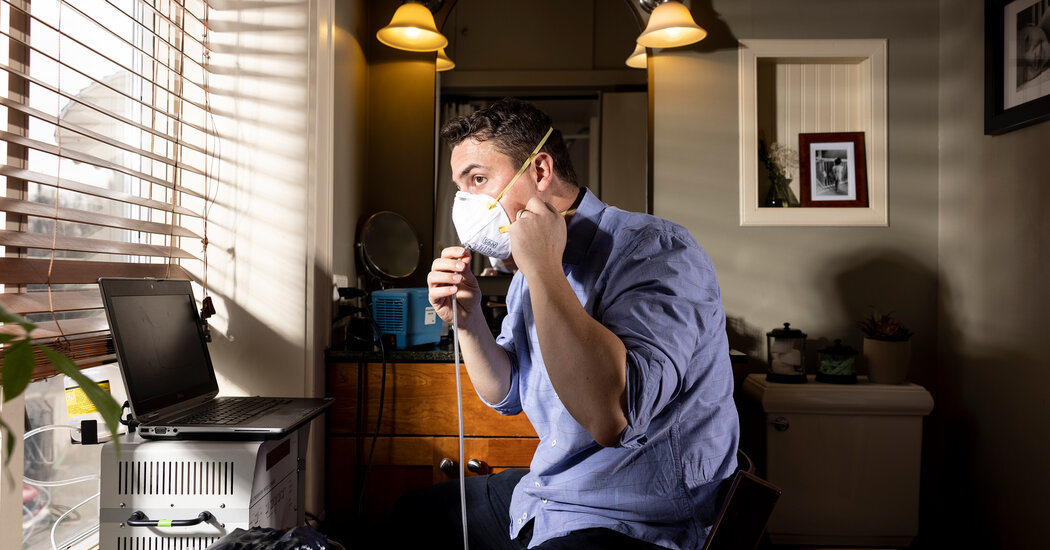 The companies, among them McKesson, Henry Schein and Cardinal Health, have been lobbying the Biden administration to retain a tariff exemption on imported protective gear that was put in place earlier in the pandemic. Those pressing for the continued tax exemption on Chinese masks, including the American Hospital Association, say domestic producers cannot meet the still-surging demand for single-use respirators and other protective gear.

Opponents sharply disagree, noting that many American companies have been struggling to find institutional buyers as hospital systems increasingly turn to Chinese imports. The price difference often amounts to a few cents per mask — enough to sway cost-conscience bulk purchasers.

In a letter they sent in October to U.S. Trade Representative Katherine Tai, a dozen Senate Democrats framed the issue as a matter of national security. “Rather than providing relief to Chinese-made products, we should invest in and support our domestic manufacturers so they are capable of providing U.S. health systems and other essential workers with the high-quality P.P.E. and vital supplies they need to manage the Covid-19 pandemic and prepare for future public health threats,” they wrote.

A spokesman for Ms. Tai’s office said the tariffs would be reimposed beginning Nov. 30.

Company executives said they had been heartened by language in the new infrastructure bill that strengthens existing rules requiring federal agencies to purchase domestically made medical equipment.

But government spending alone is unlikely to save many of the companies, whose sales have been plummeting amid the resurgence of Chinese imports, according to the American Mask Manufacturers Association, which says that nearly half the group’s 25 members have stopped making masks in recent months.

“We’re holding on to dear life at the moment but the deck is really stacked against us,” said Brian Wolin, the chief executive of Protective Health Gear, a N95 start up in Paterson, N.J., that last summer scrambled to rehire dozens of workers who had been fired in the months before the arrival of the Delta variant, which led to an uptick in sales.

Omicron Has Scary Mutations. That Doesn’t Mean They Work Well Together 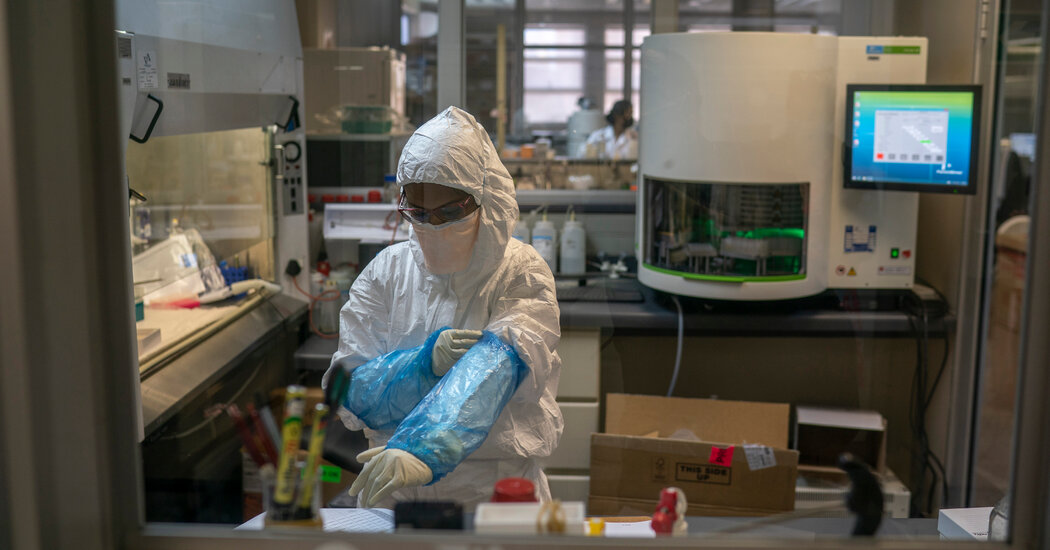 The Omicron variant of the coronavirus has alarmed many scientists because of the sheer number of genetic mutations it carries — about 50 in all, including at least 26 that are unique to it. But more does not necessarily mean worse: Mutations sometimes work together to make a virus more fearsome, but they may also cancel one another out.

“In principle, mutations can also work against each other,” said Jesse Bloom, an evolutionary biologist at the Fred Hutchinson Cancer Research Center in Seattle. “However, in this case evolutionary selection is more likely to lead to the spread of a new variant with favorable than unfavorable combinations of mutations.”

Still, this phenomenon, called epistasis, is why scientists are reluctant to speculate on Omicron’s attributes, even though individual mutations in the variant are associated with greater transmissibility or with an ability to dodge the body’s immune defenses.

“It is important to get a sense of the full virus,” said Penny Moore, a virologist at the National Institute for Communicable Diseases in South Africa.

Dr. Moore’s team is among dozens worldwide trying to understand whether current vaccines will work against Omicron. The researchers are creating artificial versions of the virus that contain all of Omicron’s mutations, rather than making judgments based on a subset of mutations.

It’s a lesson researchers learned last year, when the Beta variant emerged in South Africa. They estimated that variant’s ability to evade immunity based on one particular mutation, E484K. But Beta also had two other mutations that turned out to affect sensitivity to vaccines.

“The combination of those three mutations was more resistance than a virus that contained only E484K,” Dr. Moore said. Studying the single mutation “turned out to be misleading.”

Omicron carries a mutation called N501Y, which is thought to allow the virus to bind to human cells more tightly. This mutation was also present in the Alpha variant and was linked to its contagiousness.

“Nonetheless, it ended up being Delta, which doesn’t have that particular mutation, that was more even more transmissible than Alpha,” Dr. Bloom said. “That’s because Delta had other mutations that enhance transmissibility.”

A variant’s contagiousness depends on how well the virus binds to receptors on human cells, but also on the stability of the virus, where in the airways it replicates and how much of it is exhaled.

Omicron has a cluster of mutations that are all linked to tighter binding to human cells. “But acting together, they might have a somewhat different effect,” Dr. Bloom said. For that reason, he added, he cannot predict how the variant will act in the body.

That will require laboratory studies, which are underway across the globe.

Bob Blitz Held the NFL to Task Over the Rams’ Relocation

Seiya Suzuki’s M.L.B. Arrival Could Be Delayed by Lockout